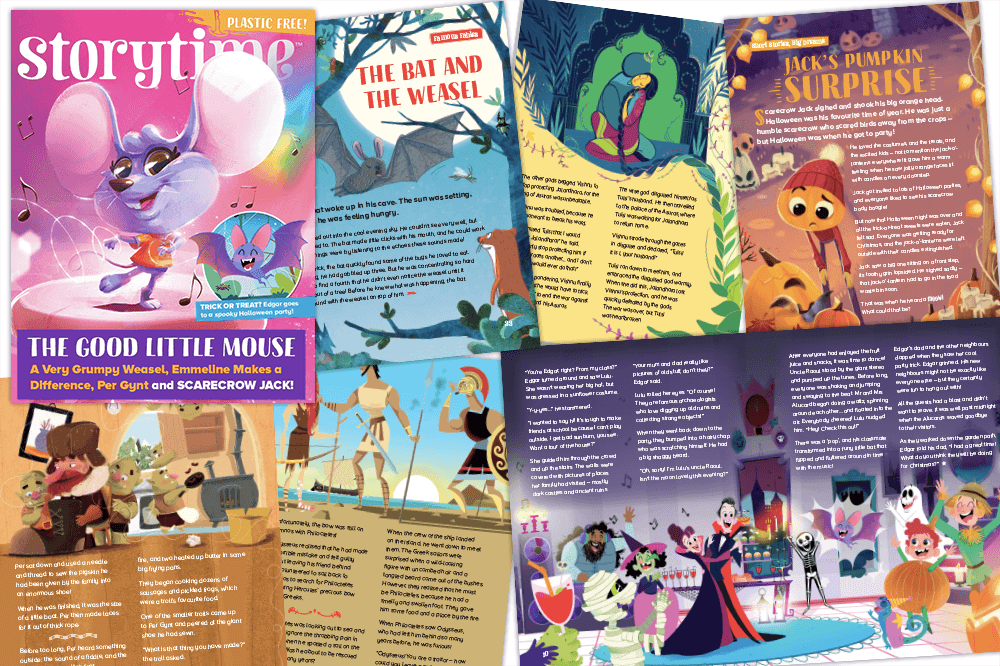 As it happens, transformation and taking on new identities is part of the theme of this month’s issue. This month’s fairy tale is The Good Little Mouse, adapted from a wonderful story by Madame d’Aulnoy. It’s about an imprisoned queen and baby princess who are helped by a magical rodent – who turns out to be a magical fairy in disguise. Artist Leo Teixeira added his own magic to this story – with spectacular results!

The Tale of Tulsi is a lovely Indian legend about a woman who is tricked by the god Vishnu… but when he feels bad about this, he blesses her by transforming her into a flowering plant with healing properties. It’s an important tale from the Hindu culture – and we love to celebrate tales from around the world in Storytime! The art for this tale was by Camilla Garofano, who really made it unique!

A Spooktacular Party! is about a boy who is nervous about his spooky neighbours. They turn out to be actual vampires (who are vegetarian!), and one of them has a special transformation party trick that we won’t spoil here! Nurdan Fenerci did an exceptional job balancing the frightening and fun aspects of the story with his art, and we’re sure you will love it!

Not all transformations have to be physical, of course. Sometimes we can ‘transform’ ourselves by taking on different identities! Susanne Straßer showed mastery in capturing the humour in this month’s fable, The Bat and the Weasel. The poor bat keeps getting pounced on by the weasel but confuses the predator by claiming to be a bird, a rodent, and an insect. Sometimes, transforming your identity can be a survival skill!

Another story about a clever trickster is Per Gynt, about a hunter who uses cleverness and a giant shoe to drive off a pack of pesky trolls, and transform an annoying situation into a very funny one. His masterstroke is claiming that his pet bear is actually a cat! Pawel Gierlinski brought this fun legend to life with unmistakable style.

Our Awesome Adventure for this month is about a little girl who transformed herself – and the world with her courage and self-belief. Emmeline Makes a Difference is about the childhood of Emmeline Pankhurst, who led the fight for women’s suffrage and still inspires people who want to make the world a better place today. Èlia Meraki’s artwork for the story is worth a special mention. All too often, the Victorian era is depicted only as grim and drab, but she portrays it as it also was – vibrant, lively, and full of colour!

Our final tale is an ancient Greek myth that you might not have heard of! Dr Rachel Bryant Davies of Queen Mary University, who we collaborated with on our recent We Are Heroes project earlier this year, provided the myth of a hero who misses out on the Trojan War when he steps on a snake and gets left behind on a desert island. The happy ending comes about thanks to one of the most transforming acts possible – forgiveness! There really is a lesson there for all of us. Ricardo Fernandez takes us on this journey, through his wonderful art!

And we cannot help but end this blog with Scarecrow Jack’s bedtime tale in the Short Stories, Sweet Dreams section. After an awesome Halloween party, Scarecrow Jack’s lonely night is transformed by the power of kittens! Giorgia Broseghini knows cats only too well and made sure everyone’s heart will melt with a cuddly final scene!

We hope stories will transform the long Autumn nights into cosy ones for our readers! Our October issue has plenty of treats and no tricks. We hope you find it sweet and fun, and we wish you all the most wonderful Halloween ever!

Thoughts on stories for kids, illustration, creating a children's magazine, reading for pleasure, improving childhood literacy, and more from the makers of Storytime.

A Summer of Stories!